Although political parties and candidates are actively using social networks for the dissemination of campaign materials, online advertising is not a form of election campaigning, according to the law on parliamentary elections. Besides that, CEC's Resolution #1010 of 14 June 2019, which establishes the forms of financial reporting on the receipt and use of electoral funds of political parties and MP candidates, does not provide any classification codes for online advertising in general and social media ads in particular. The NAPC also lacks a special technique for tracking advertisements on the global web. As long as there are no explicit prohibitions, it's impossible to bring to justice those responsible for placement of election campaigning in the internet and social networks financed from other sources that election funds.
On the other hand, the law prohibits the use funds belonging to parties, MP candidates or other sources for election campaigning, including initiative of voters. Thus, advertising in social media paid by a third party is not an acceptable form of campaigning.

One of the only open sources of information about campaigning on the Internet, particularly on Facebook, is the Political Advertising Library, created by the company to increase transparency and accountability in advertising and prevent foreign interference in elections throughout the world. New rules for the placement of political advertisement have introduced a number of requirements. For example, an advertiser must confirm his/her identity, as well as provide additional information (address, phone, email, website). Besides that, Facebook has prohibited placement of political advertisement by foreign citizens to prevent foreign interference in elections. Now all political advertising is stored in Political Advertising Libraryfor 7 years and is open to the public. Civil Network OPORA used these data to assess how often electoral subjects use political advertising in Facebook, and whether they finance it from electoral funds.

Thus, 40,427 political ads have been placed on Facebook from 05.24.2019 to 07.15.2019. The number of published advertisements had been increasing as the Election Day approached. 72% of publications were placed in July. 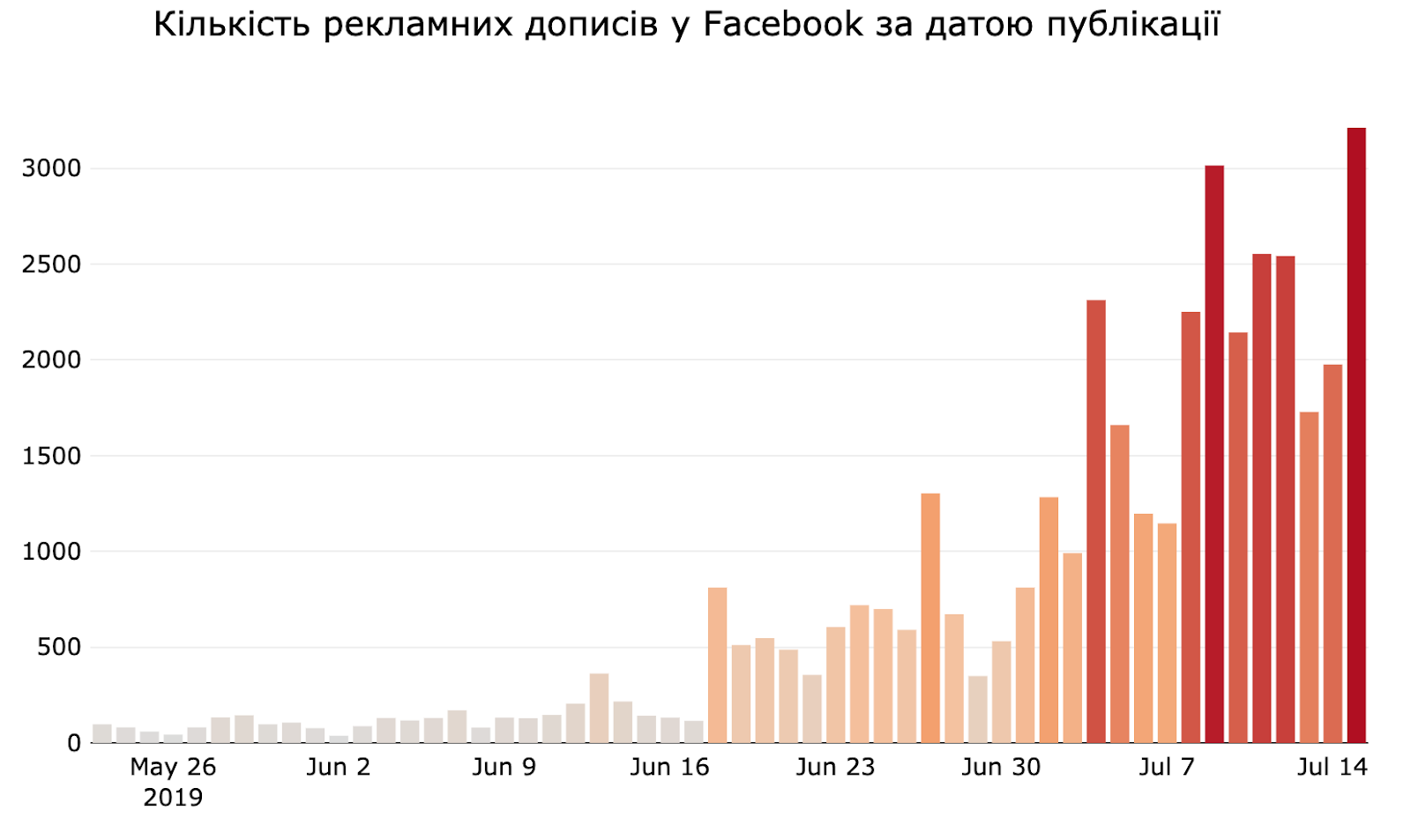 The "Holos" political party had spent the largest amount of funds - about 230 thousand dollars, on 470 advertisements for campaigning on Facebook. The party targeted its advertising the most often at citizens of Lviv city (almost 11% of all impressions), and citizens of Kyiv city. Voters of Donetsk and Luhansk oblasts saw the smallest number of advertisements. It is also interesting that "Holos" has the youngest audience. Moreover, it is the only party whose campaign materials were spread on citizens under 18. The party has reported in its interim report expenses on Facebook advertising services in amount of 1.5 million hryvnias (around 57 thousand dollars).

The European Solidarity political party had placed 250 ads on Facebook costing over $209,780 from 05.23.2019 to 07.15.2019. The party targeted its advertisements the most often at residents of Kyiv city and Lviv oblast, and citizens of eastern and southern oblasts received little attention. Party's interim report contains no expenses on the placement of propaganda materials in social networks.

The Power of Law political party spent over 136 thousand dollars on 66 campaign materials. Most of the party's ads were shown to voters in Kyiv city and Lviv oblast. According to Facebook, political advertising of the party was financed by the All-Ukrainian Union "Spilna Sprava" NGO and the All-Ukrainian Public Movement "Power of Law". According to the interim financial report, the party does not receive income and expenses from the election fund.

All-Ukrainian Union "Batkivshchyna" political party posted 76 advertisements on Facebook costing over 72 thousand dollars. Campaign advertising were viewed the most often by residents of Kyiv city and Lviv oblast. According to the Facebook's data, party ads were paid by the Modern Advertising Solutions LLC and non-governmental organization "I am for Tymoshenko". Interim financial report of the party contains one payment to the Modern Advertising Solutions LLC amounting 100 thousand hryvnias under article 1400 "Other expenses on election campaigning".

"Opposition Platform - For Life" Political Party posted 2,350 promotional publications on Facebook costing over $ 47,000. Most of campaign materials of the party were posted on page "Boiko - Prime Minister" Voters over 35 years old living in southern and eastern oblasts of Ukraine became the target audience of advertising messages. Most of the party's promotional posts were paid by the "Boiko - Prime Minister" Public Movement. The financial report does not include expenses on advertising on the internet and social networks.

Political Party of Sharii spent over $ 44,533 on placement of 1,607 Facebook promotional posts. Voters in the city of Kyiv and Dnipropetrovsk oblast saw political advertisements the biggest number of times, and the smallest - in Chernivtsi oblast. Interim financial report of the party has three payments for election campaigning on the internet in amount of 1.3 million hryvnias.

"Samopomich" political party has placed 199 ads on Facebook costing more than 38 thousand dollars. Their campaign promotions were seen the biggest number of times by residents of Kyiv city and Lviv oblast. Around $ 14,000 for advertisements of this political party were paid by the Your Choice NGO. Interim report of the party contains one payment for the placement of online advertisements costing around 50 thousand hryvnias.

Opposition Bloc political party paid over 36 thousand dollars for the placement of 336 propaganda materials on Facebook. The largest number of advertisign publications was seen by residents of Dnipropetrovsk and Kharkiv oblast, and the smallest - by Volyn oblast. Interim financial report does not have any payments for advertising on the internet and social networks.

Ukrainian Strategy of Hroisman political party spent over 30 thousand dollars for the placement of 103 promotional posts on Facebook.  Political advertising was viewed the most by voters of Kyiv city and Lviv oblast, and the least by Luhansk and Donetsk oblasts. Party's interim report has no payments for the placement of advertisement on the internet.

The total amount stent by political parties and leaders of electoral lists has reached over 1 million dollars on political ads in parliamentary election. At the same time, according to interim financial reports of parties, the totals of expenses on advertisements in the internet from the moment elections funds were opened till 10 July 2019 reached a little bit more than 3 million hryvnias, or 110 thousand dollars. Candidates in single-mandate constituencies spent about 500,000 dollars, i.e. two times less than political parties.

Data on expenses of political parties on Facebook advertising

In addition to the active use of social networks by political parties and candidates, the number of advertising with elements of "black PR" has also increased. However, such materials were usually disseminated against candidates in single-member districts. Page "Only Truth" is an example of a purposeful national-level "black PR". It published 11 advertisements, 10 of which discredited one of the parties. However, despite the rules for placement of political advertisements, these ads were non-marked, with no information about the payer. It should be mentioned that one of administrators of this page resides in the Russian Federation.

We would also like to mention that general trends in the change of advertising forms and means demand changes in legal oversight and reporting mechanisms for online and particularly social network ads, as well as introduction of clear restrictions allowing to bring electoral subjects to account.